WhatsApp, Facebook Messenger, Instagram, YouTube, Google Maps, Twitter, Shazam, Tiktok… Smartphone applications have become an indispensable part of our daily lives. We use these apps every day to create, get information, shop or just have fun! 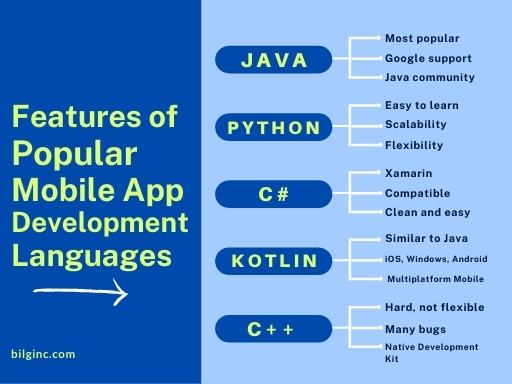 As you can imagine, one of the most preferred programming languages is Java, the official language of Android Application Development. The majority of the applications we see in the Play Store are built with Java, and at the same time, Java is the language most supported by Google. Another thing that users who prefer Java is pleased with is that Java has a good online community where they can find support in case any problems occur while coding.

But for beginners, Java is a difficult and complex language. Especially The Android Software Development Kit (SDK) will challenge new mobile application developers.

As one of the most popular programming languages of 2021, Python can also be used to develop mobile applications. Although Android does not support native Python development, you can solve this problem by using various tools (such as Kivy) that convert Python applications to Android Packages that can run on Android devices.

Mobile application development companies need features and functions such as scalability and flexibility, and the Python programming language offers all these features. We know that applications such as Instagram and Dropbox were also created with Python.

You can check this page to see the best way to specialize in Python.

As a programming language, C# is very similar to Java and therefore ideal for mobile application development. In addition, thanks to the Xamarin platform, which has become increasingly popular due to the support of Microsoft, you can develop applications that are compatible with all mobile platforms using C#. These will be Native mobile apps and will be compatible across various platforms such as Android, iOS and Windows.

Also, C# has a cleaner and simpler syntax than Java, making it relatively easy to code. So for beginners, it might be a better choice than Java. If you want to develop Cross-Platform Apps With C# Using Xamarin, take a look at this course!

Kotlin is a static type programming language running on the Java virtual machine and it was introduced as the second “official" Java language in 2017. It is also a cross-platform software language. By using Kotlin, which has been supported by Google since 2017, you can continue to benefit from Java while developing mobile applications.

Kotlin, which is a simpler language than Java, can also make applications look better. Thanks to Kotlin Multiplatform Mobile, you can make your work easier by using a single codebase compatible with all iOS, Windows and Android applications. You only need to write platform-specific code when necessary, so you can save time. In fact, if you already have a mobile application, you can use Kotlin to adapt this application to every platform.

C++ can be used for Android Application Development using the Android Native Development Kit (NDK). However, an application cannot be created only using C++. In this case, NDK is used to implement the required parts of the application in C++ native code.

Although the C++ programming language is preferred for mobile application development in some cases, it is much more difficult to install and less flexible. Because it is a complex language, it can also increase bugs and lead to more errors. For this reason, if we need to make a comparison, it is possible to say that C++ is the least useful language among the languages in this article.

As a developer, your duty is to write bulletproof code. What if we told you that despite all of your...

This is a technical course that introduces the Python 3 programming language. It is an instructor le...

C is one of the most widely-used languages for systems software and workstation application programm...

Xamarin is quickly gaining a lot of traction within the Microsoft developer community. Using the sam...

C++ is undoubtedly one of the most widely-used programming language for implementing object-oriented...

WHY YOU SHOULD CHOOSE RED HAT CONTAINERS

TOP 5 CLOUD CERTIFICATIONS TO PURSUE IN 2021

3 REASONS WHY AWS IS THE LEADING CLOUD PLATFORM

6 IMPORTANT TIPS FOR AGILE COACHES IN 2021

ALL ABOUT VMWARE SPRING PROFESSIONAL CERTIFICATE

ALL ABOUT THE ORACLE CERTIFICATION PATH

ALL ABOUT THE PMP CERTIFICATION EXAM